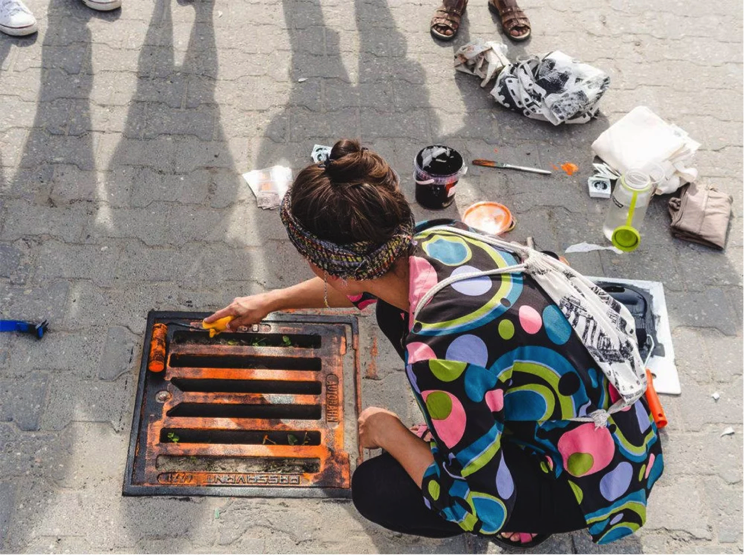 Raubdruckerin, which means something like pirate print in English, is a group of artists and designers located in the city of Berlin who, with their street print, make garments with unique designs.

These guys create their products from the reliefs that exist in public roads, such as culvert covers, grids and floors with certain patterns. Its main objective is the geometric shapes that include the name of the locality where they are located, in this way they design unique pieces with specific memories of the city that has been visited.

The idea began in 2006 in Portugal when Emma France Raff, as the main character in this story, launched together with his father painter to the streets of Lisbon, the place they were living in, to begin using urban design as templates for textile stencils. This resulted in the movement becoming known.

The first event took place in 2007 at the “Músicas do Mundo” Festival in the city of Sines in Portugal. And two years later in Berlin. In addition, the project was expanded to other cities such as Barcelona, Amsterdam, Paris, Brussels, Oporto or Madrid.

The purpose of these artists is to highlight the urban art that exists in cities and that we all normally overlook. The idea of their creations serves as an impulse to enter everyday culture.

The products are created manually and only need a roller and paint. First, look for and choose the public design that you want to print. Then it is cleaned and carefully covered with ink. Finally, a shirt or piece of cloth is put on the culvert covers or grids and then the roller is used to match the paint. And ready!.

All paints, materials and machines used in conventional printing methods are omitted, since the stamping is done directly from the existing structures. And here comes the most important: the paint used in the process is ecological, water-based and without solvents, plasticizers or heavy metals.

In addition to constantly looking for places and reliefs where to create their pieces, this group dictates workshops and street printing workshops. All his creations are available for sale on his website: https://raubdruckerin.de/